The microcontrollers are direct replacements for Arm MCUs, aimed at Chinese OEMs who are being cut off from getting Arm products.

GigaDevice has launched what it claims is the world’s first general-purpose microcontroller (MCU) based on RISC-V, a device aimed at the Internet of things (IoT) market.

GigaDevice, based in Beijing, and one of China’s larger manufacturers of nonvolatile memory (NVM), a few years ago began producing drop-in replacements for Arm-based GD32 MCUs originally designed by ST Microelectronics. GigaDevice similarly claims “complete compatibility” between its new GD32V RISC-V microcontrollers and the classic GD32 series of MCUs based on Arm.

GigaDevice executives stressed that the company remains a strategic partner with Arm. Adding the RISC-V line is all about providing options.

Chinese electronics companies sharpened their collective focus on open-source RISC-V months ago, when President Donald Trump started placing export controls on western technology, including Arm intellectual property (IP). RISC-V is an open source technology, however, and not subject to similar restrictions; it represents a readily accessible alternative for Chinese manufacturers to control their own technological destiny. 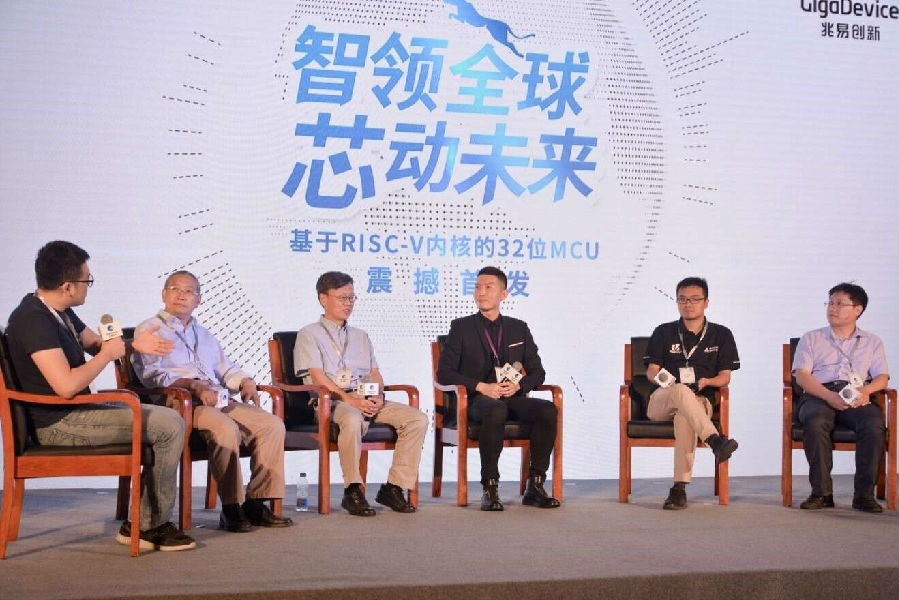 RISC-V gives users extraordinary latitude. Ni Guangnan, a member of the Chinese Academy of Engineering, speaking at GigaDevice’s launch event said, “RISC-V is based on the standard loose BSD (Berkeley Software Distribution) license. Users are free to use the design CPU, or develop and add their own. They can extend the instruction set and choose whether to publish it publicly, sell it commercially, or replace it with other license agreements, or use it completely closed-source.”

RISC-V offers flexibility, but then there is the inevitable question about the lack of a supporting ecosystem. RISC-V’s ecosystem is rather limited, especially compared to those enjoyed by MCUs based on the widely-available Arm and X86 architectures. Wouldn’t that hamper the further growth of RISC-V development? 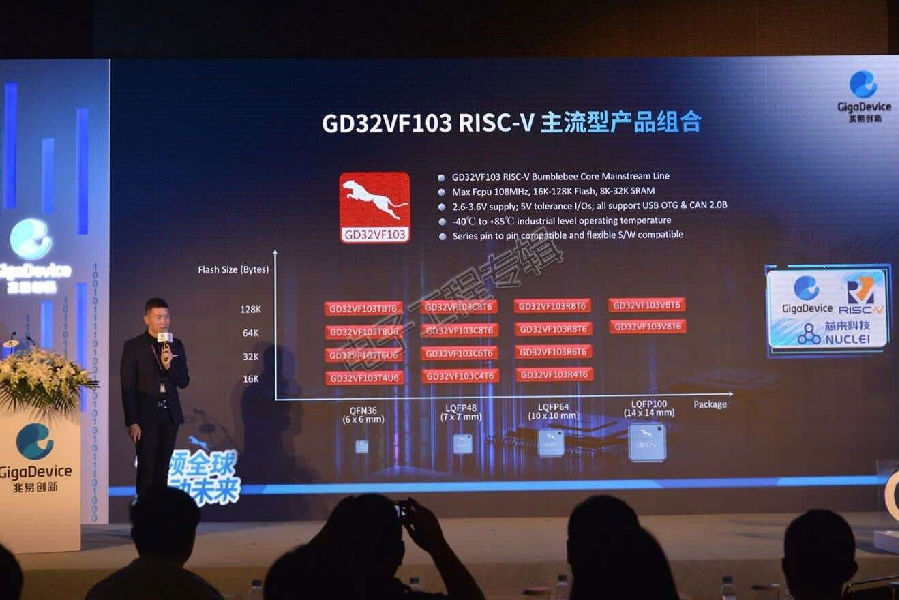 GigaDevice introduces its RISC-V microcontroller. The company claims it is the first general-purpose RISC-V MCU.

China believes the lack of a RISC-V ecosystem is less of an issue when addressing the Internet of things – essentially an emerging set of new embedded markets. The IoT market is still developing, fragmented, and has diverse customer needs. No company is entrenched anywhere, so ecosystem support is less of an issue. When it comes to IoT applications, RISC-V is at much less of a disadvantage versus Intel and Arm than it would be in other, more mature markets, such as mobile, desktops, and servers.

He Xiaoqing, vice chairman of the Embedded Software Association in China, said at the event: “The hardest thing to do in the ecology is the mobile market, followed by desktops and servers. The IoT ecosystem is much easier.”

The first line of GigaDevice MCUs will bear the designation GD32VF103. The line is aimed at “mainstream development requirements.” At the introduction, the company listed 14 configurations of the 103. Each is built on the Bumblebee 108MHz core designed in cooperation with Nuclei System Technology.

The main differences in the 14 models are different amounts of flash memory capacity, and four different package options. These products have all been mass-produced and marketed, according to the company.

GigaDevice believes it has built “The bridge with RISC-V” – a path for companies who have been designing with Arm-based MCUs to quickly make the switch to its RISC-V based replacements. The “complete compatibility” between the two product families should ensure the reusability of the code, the company said, “making cross-core MCU selection and design” very convenient. “This is our very leading, unprecedented innovation,” according to GigaDevice.

According to data released by GigaDevice, the GD32VF103 series MCU has a performance of 153 DMIPS at the highest frequency and a score of 360 points in the CoreMark benchmark test, which the company claimed was 15% faster than the GD32 Arm-based core, while also consuming half the power. 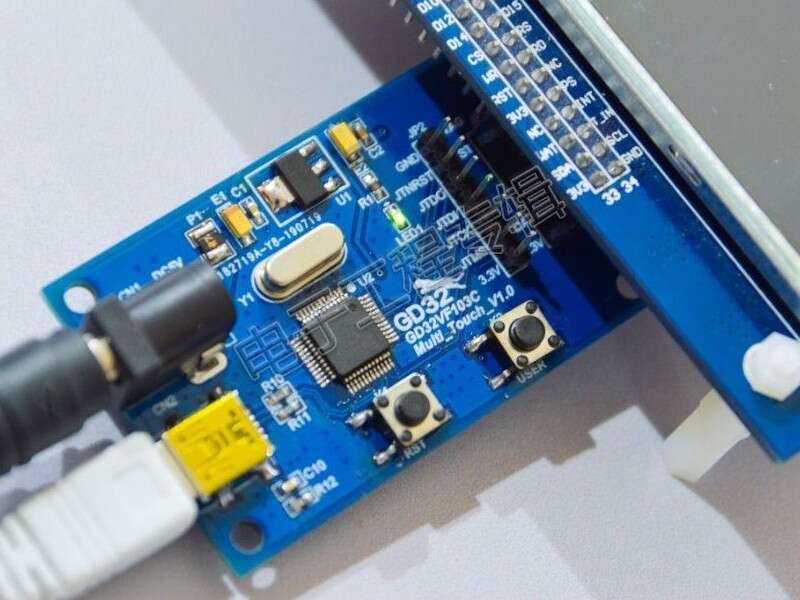 Features and performance parameters of the 103 include:

GigaDevice believes its expertise in memory technology is a key differentiator. GigaDevice EVP and general manager of the MCU business Deng Yu gave an example: “TI acquired Luminary from Arm, but TI's acquisition is not successful. Luminary does not have the Flash gene, so some products will have problems with the program. But we have experience in Flash. We can ensure that such problems will not occur.”

GigaDevice gave assurances that product development with the GD32VF103 is quite fast. Director of maketing Jin Guangyi said “users can implement RISC-V with the development tools at hand.”

“We are cooperating with a number of vendors, including vendors that make software, middleware, integrated development environments, debug download tools, and terminal solutions.” Jin said, “It’s not enough to rely solely on our chip side. It also needs upstream and downstream. In addition, we provide an open platform, and we have more third-party partners. We are ready to develop a full ecosystem.

“We are also the first. You can use the RISC-V universal MCU to solve any problem from scratch,” Jin added.

GigaDevice has shipped more than 300 million MCUs, and the pace of its shipments is accelerating; it took less time to go from 200 million to 300 million than it did to reach 100 million and then 200 million earlier. Those numbers include the earlier Arm-based MCUs. 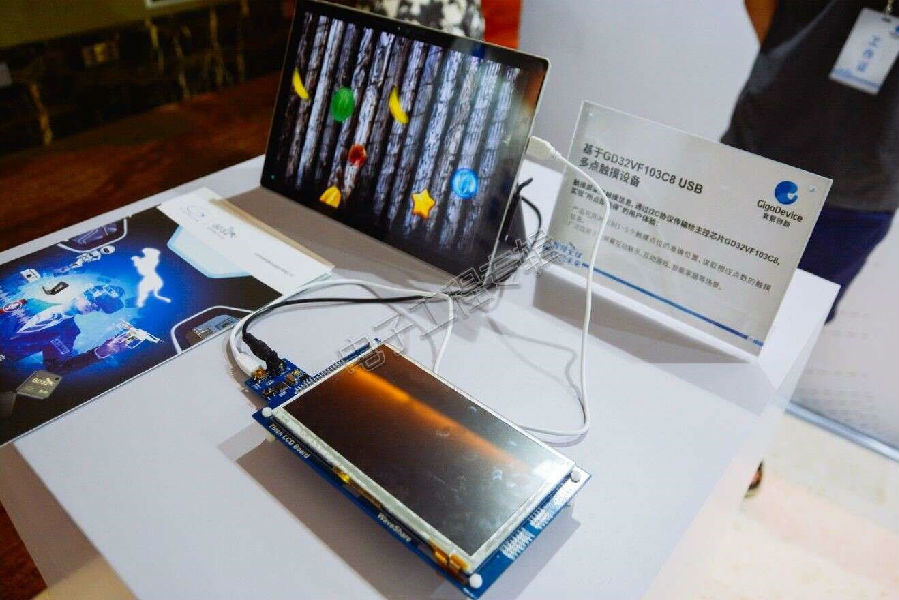 The GEZ thermal printer is based on a version of GigaDevice's new MCU. (source: EE Times China)

The company expects to reach the 400 million mark next year, and earn a 10% market share within China. “RISC-V will drive our shipments. Although we still have to look at the actual performance of the market, we think that shipping that amount can be expected,” said Jin.

By adding RISC-V versions of Arm MCUs, while remaining a strategic partner with Arm and continuing to sell Arm-based MCUs, GigaDevice believes it can off customers one-stop shopping.

What’s next for the line is adding support for wireless. “We want to join the wireless connection function of the MCU, eRF, will release the first product to join the WiFi connection next year,”Jin said.

Applications for the new MCU

There are already practical applications of the GD32VF103 series.

For example, in the micro thermal printer solution from GEZ Microchip, the MCU is the GD32VF103C8. This solution can be applied to the built-in micro-printer equipment of point-of-sale (POS) printers, tax-controlled printers, ATMs, etc.. It was printing bills at the exhibition.

Another example is a USB multi-touch device based on GD32VF103C8. The following touch screen collects touch information and transmits it to the main control chip GD32VF103C8 through I2C to realize touch operation, and at the same time, 1-5 touch points can be recognized. There are any number of specific applications with large-screen interactive displays, interactive games, smart homes, and so on.

The above example is an air purifier solution from the IC Superman, where the GD32VF103C8 is responsible for controlling peripheral operations such as negative ions, ozone, and motors.

A touchscreen controller based on the GigaDevice MCU (Source: EE Times China)

The original Chinese-language version of this article was published in EE Times China.