From February 25-27 2020, the world's largest embedded system exhibition, the Embedded World 2020, was successfully held in Nuremberg Germany, with more than 900 manufacturers from 42 countries attracted and participated at the conference.

GigaDevice, as the leader of China's 32-bit general-purpose microcontroller market, participated in this event and showed many embedded application solutions to developers worldwide. At the conference, GD32 had an extensive and in-depth interaction with global MCU developers and discussed with new third-party partners to continue to grow their MCU ecosystem. 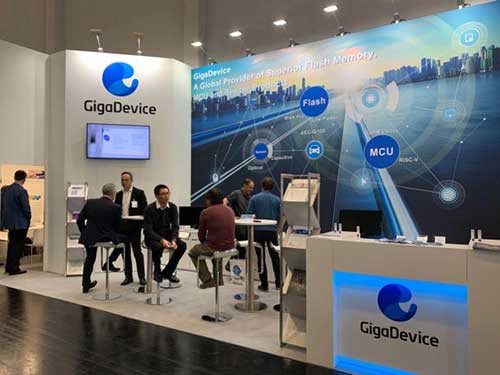 GD32VF103 wins the Embedded Award 2020 as the best hardware product 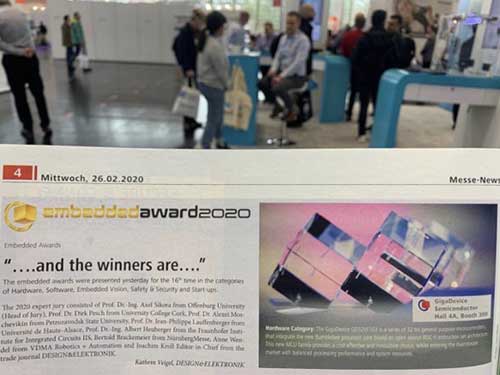 This year is the 16th consecutive year of embedded awards and selection of best products. The selection has been categorized in 5 fields, including hardware, software, embedded vision, security and start-ups. The award winners and the ceremony event were reported in the journal of the exhibition, published on 26th Feb.

With the GD32VF103 MCU product series, based on the RISC-V open source ISA (Instruction Set Architecture), GigaDevice has won the award in the hardware field. GD32VF103 series MCUs expand GigaDevice’s portfolio and supply our users with the latest RISC-V product line consisted by broad model choices. The new RISC-V MCUs can help the users to differentiate their products from their competitors and provide new solutions, while they maintain their easy to use and cost-effective characteristics.

GigaDevice RISC-V MCU has created a new era for the market because it is the first time in the global market that a general-purpose MCU has been launched using a RISC-V core. The new product is completely different from the soft-core solution implemented on FPGAs and it is more like the general-purpose MCU based on Arm Cortex-M cores. 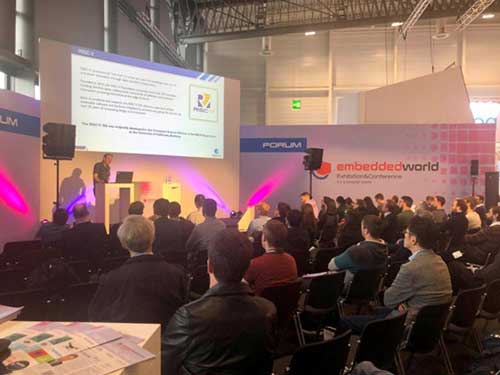 Mr. Reuben Townsend, EMEA FAE Manager of GigaDevice, gave an impressive keynote speech to the audience at the Embedded World. Reuben introduced the development of the latest RISC-V embedded technology and the characteristics of GD32VF103 product series.

He introduced the basic RISC-V terminology, explained the RISC specifications and provided in-depth explanation about exception handling, interrupt handling, peripheral design and other aspects which are completely determined by the microcontroller manufacturers.

The GD32VF103 series RISC-V products are compatible with more than 340 models of the GD32 Arm MCU family. This unprecedented and unique feature is very important because it provides an easy and quick way to work with the new RISC-V MCUs, and opens the widely opens the development door for the developers with certain experience in embedded systems 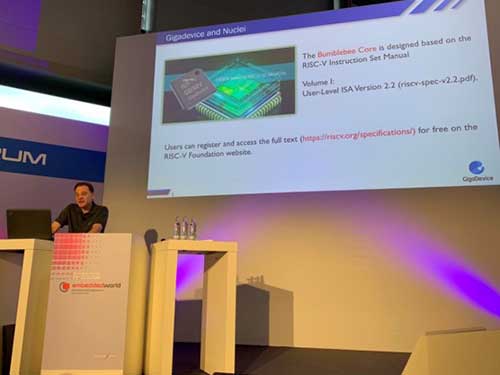 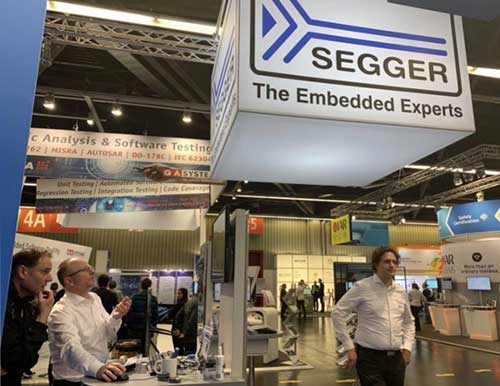 A variety of GD32 MCU development boards and solutions were also displayed at the SEGGER booth, one of the most well-known embedded tool manufacturers in the industry. SEGGER has cooperated with GigaDevice, providing full support of GD32 series Arm and RISC-V core MCUs with the SEGGER development tools. Including: Embedded Studio IDE, market-leading J-Link emulator, Ozone debugger, real-time operating system embOS and communication, data storage, software libraries in the field of IoT, and Flasher programmers.

SEGGER Founder and CEO, Rolf Segger said, "It is a great honor to participate in the launch of the first RISC-V core MCU in Beijing. Our tools help the GD32 RISC-V core MCU reach its full potential, and this is an important milestone for SEGGER and RISC-V". 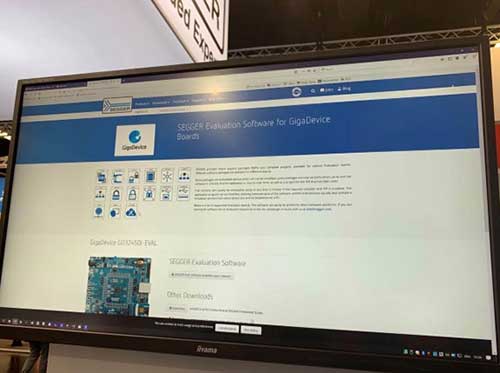 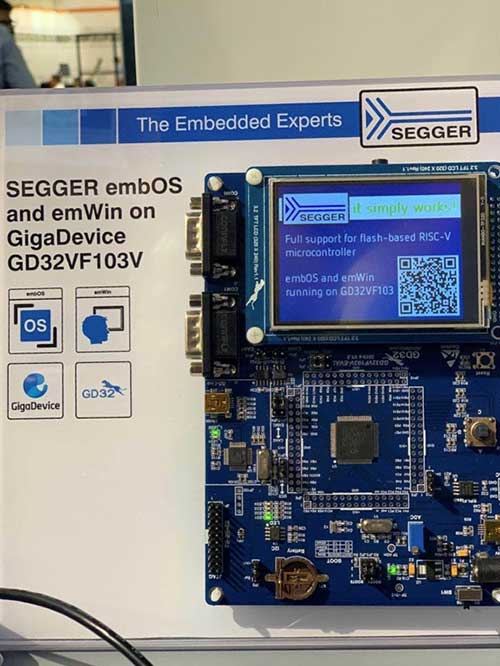 SEGGER emWin is a stable and efficient graphics software library for embedded platforms and it is developed completely by SEGGER. It is suitable for any graphic LCD operation application and can output high-quality non-aliased text and graphics. By using the emWin library interface, the development of embedded graphical interface applications becomes simple and fast. 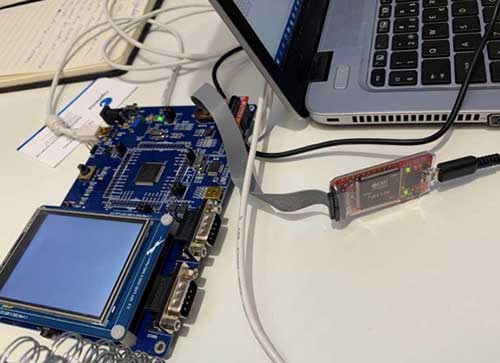 IAR Embedded Workbench software, launched by the well-known Swedish software developer IAR Systems, has also fully deployed RISC-V and has evaluated the GD32VF103 MCU product series. Such a solution was exhibited at the booth of IAR. Using the simulation debugging tool I-jet as a JTAG hardware debugging emulator, connected to a PC running Windows through USB, you can use the IAR Embedded Workbench to develop with the GD32 MCU series shortly. 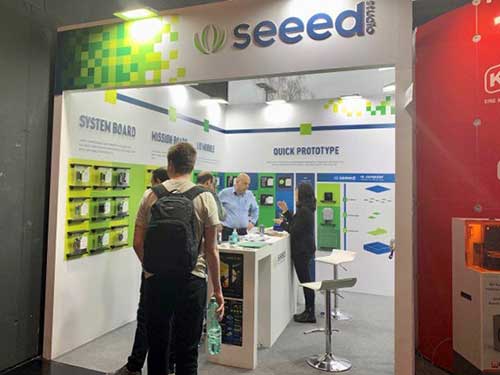 As an IoT hardware empowered, Seeed has been committed to providing diversified development and application solutions for developers worldwide. The latest GD32 image processing development kit was displayed on the Seeed booth. 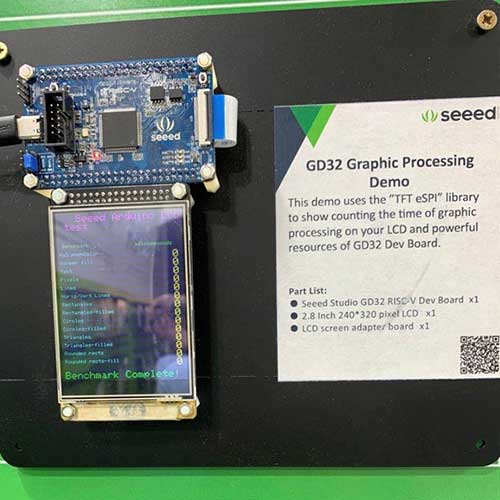 This kit adopts the GD32 RISC-V development board, developed by Seeed Studio as the controller board, while it connected with a 2.8-inch LCD display. It can easily implement various display effects by calling the "eSPI" graphics library. The RISC-V development ecosystem around the GD32 MCUs is gradually maturing, with more and more partners adding support.

Continues to Strengthen their MCU Portfolio 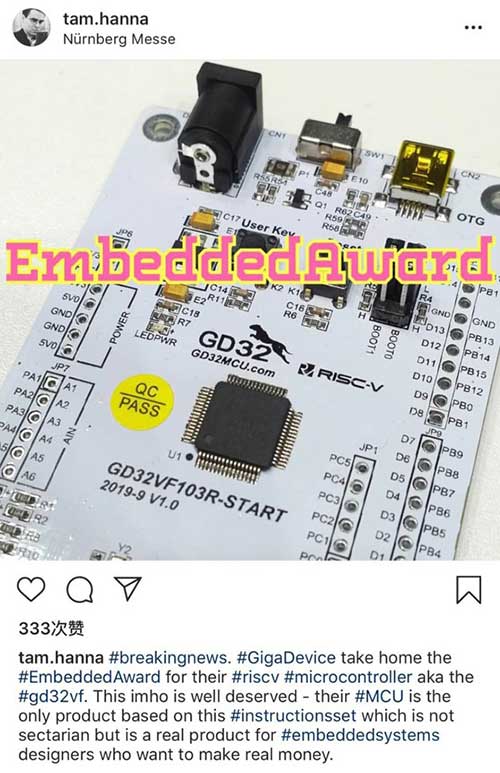 GigaDevice is continuously promoting the innovation of embedded applications, proving the significance of GD32 products in the MCU field for the future of the embedded world. Tam Hanna, a well-known expert in the embedded field visited GigaDevice at the exhibition site and mentioned that "GD32 MCU deserves the Embedded Award, the GD32VF103 series is a general-purpose MCU series and it is the first products with a RISC-V open source instruction set architecture core on the market. For designers who want to make money, this is the real product."