Abstract: GigaDevice hosts student competitions to bridge the gap between the academic world and the industry. The goal is to promote the GD32 University program to cultivate embedded development and application talents, unite upstream and downstream to enhance the MCU ecosystem, and help integrate circuit industry development.

The integrated circuit industry is the core of the information technology industry. While education is necessary to nurture and develop engineering students’ talents and skills, offering hands-on experience and training in the industry is even more critical. The "GigaDevice Cup" for the 15th China Graduate Electronics Design Contest was successfully held in Nanjing on August 19th to 21st, 2020. The objective of the contest is to enable close interaction between the university and the industry.

In the current era of the integrated circuit industry, it is the right time to hold an annual group electronic design innovation and creative practice event for graduate students. A microcontroller (MCU) is the control core of any electronic system. GigaDevice GD32 MCU, as a leader in China's 32-bit general-purpose MCU market, has provided a considerable product lineup consisting of more than 370 models in 27 series; its market share has consistently ranked first in China's domestic market.

Student Contest - Bridging the gap between talents and the industry 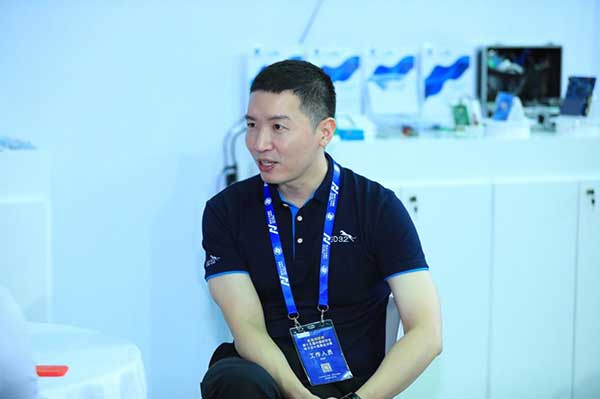 This year, 24 teams won the special prizes of the "GigaDevice Cup." Among them, the Xiamen University team won the first prize with the "GD32-based 4G experimental instrument monitoring terminal system" project, while the other 23 teams won secondary awards. 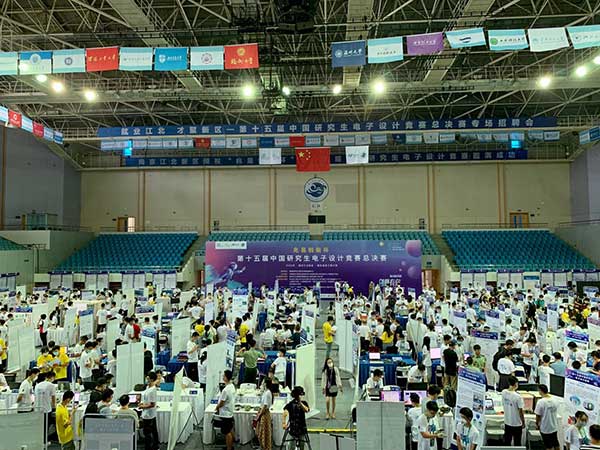 Mr. Eric Jin said cultivating integrated circuit development and application talents is essential to promote the semiconductor industry's growth. During the half-year period from registration to the national finals, the Graduate Electronics Design Contest improved the creative and practical ability of high-level talents like graduate students and provided a kind of industry-based training.

Close integration with universities, talents' training, and delivery of skills to enterprises are the critical links in the integration of production, education, research, and continuous advancement. As the largest 32-bit general-purpose MCU manufacturer in China, GigaDevice has always been at the forefront of the industry in terms of university student development. Thus, it can continuously enhance the embedded teaching and establish a partnership with the industry to supply well-trained candidates for technical positions.

The GD32 University Program is used to link higher education institutions with the rich products of GigaDevice GD32 MCU and provide teachers, students, and scientific research workers with a resource and exchange platform based on GD32 MCU and jointly build a development ecosystem. According to Mr. Eric Jin, the GD32 university program currently includes four aspects: creating high-quality courses for students, offering teacher training to combine production and teaching, establishing joint laboratories to promote development and practice, and holding electronic competitions to highlight the latest in innovation. The University program helps teachers, students, and scientific research engineers to master the advanced technology related to GD32 MCU, realize the complementation of educational resources, and promote the cooperation between the industry, universities, and researchers. These four aspects are interlinked to create a new practice model for the training and transportation of embedded talents and become the foundation for future innovation development. 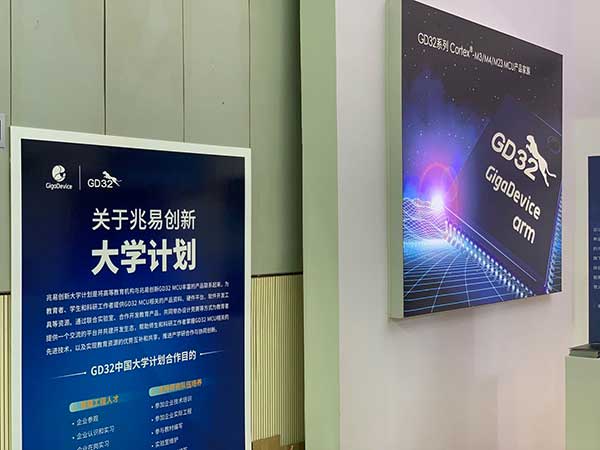 As an essential part of the GigaDevice GD32 university program, the Graduate Electronics Design Contest is promoted simultaneously with the GD32 university program. It has become a practical camp for college teachers and students to compete on the same field. In the past three years, the average annual growth of the number of teachers and students who signed up for the electronic research competition has approached 30%. The number and quality of entries based on GD32 have repeatedly reached new highs. More and more students are entering the GD32 development platform, cultivating their technical skills and creativity.

The GD32 University Program also respects and gives full play to the universities' research directions and teaching methodologies. The program allows the joint laboratories to work as a base to devote themselves to curriculum training and development practices in various application fields. In April last year, GigaDevice GD32 MCU and Hefei University of Technology formally established their joint laboratory. Mr. Eric Jin revealed more GD32 MCU joint laboratories would unveil this year featuring artificial intelligence (A.I.) research, motor control, and automotive applications. These labs will promote GD32 MCU in more innovative fields worldwide, and at the same time, enhance the research and innovation capabilities of teachers and students. 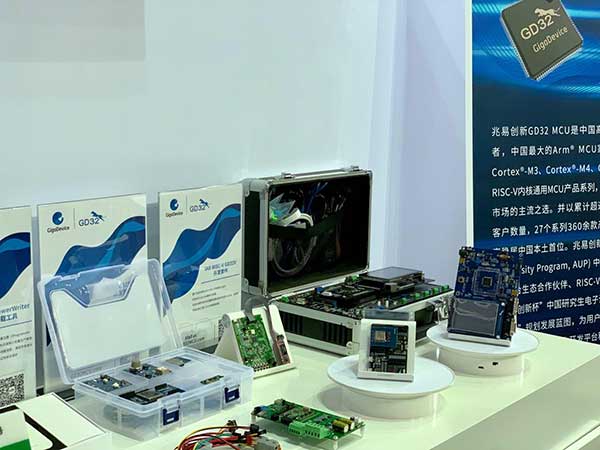 Through the implementation of the university programs, we recognize the potential of young people, Eric Jin said. They can maximize their learning, overcome difficulties, and develop beyond imagination. Many revolutionary innovations were born in schools. Therefore, the GD32 university plan helps them master creative tools, expand more technological horizons, and serve as mentors and friends of young people to grow together.

We believe that in the future, more GigaDevice products and joint laboratories will take root in the soil of colleges and universities, expanding the development ecosystem and enabling the industry, universities, students, and teachers to benefit from it.

According to domestic and international market research institutions' foresight,

Mr. Eric Jin continued saying that while the number of participants continues to grow, in recent years, the use of MCUs used in participating projects has become more widely accepted, which to a certain extent, reflects the overall development trend of the current market. The increase in demand for Chinese MCU manufacturers has become an important driving force for the recent industrial development. The general trend has given GigaDevice more opportunities and social responsibilities. Creating an MCU should not only start with the cultivation of young talents, but also develop an into an MCU development ecosystem with the market and its customers.

The microcontroller is the main control chip in every system, so for the terminal application manufacturers, it is both the core of the system and the platform for it. Relative to different customers' needs, the GigaDevice application development team develops various types of solutions through self-research or cooperation with third-party partners to realize the vision of an "MCU department store" and promote the construction of the MCU product family and ecosystem.

On the one hand, GD32 has cooperated with global partners to launch a variety of integrated development environments (IDE), development kits, operating systems (RTOS), graphical interface(GUI), security components, and cloud connectivity solutions. It also provides various series of videos and tutorials on the technical website available for online on-demand learning. The GD32 MCU rich development ecosystem provides convenience and guarantee for the user design and reflects the product value and service concept of GD32.

During the current Graduate Electronics Design Contest finals, GigaDevice also set up an exhibition area at the competition site, inviting well-known MCU partners to enter the campus. Following addressing the interests of the competitors, they exhibited the AWTK open-source GUI graphics engine of GD32, the IAR I-jet and Embedded Workbench tool for RISC-V, the SylixOS real-time operating system, the GD32 Bear-Pi IoT development kit, the OneOS IoT development platform for 5G, and a variety of exhibits such as industrial control boards, laser rangefinders, and portable blood oximeters. They also provided updates on the latest market trends, hot products, and talent recruitment policies to the participating teachers and students. 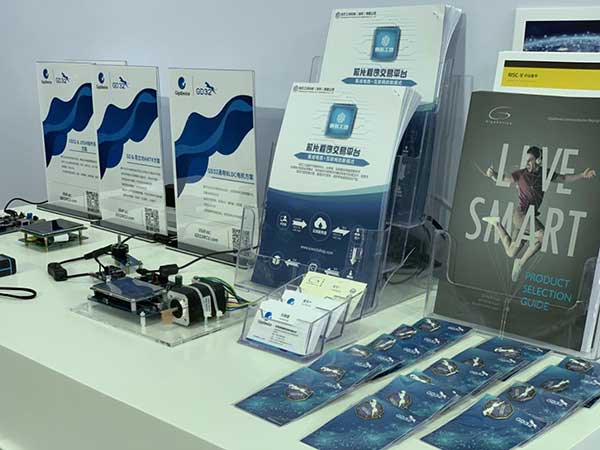 The GD32 MCU family has a rich product portfolio, with more than 370 product models, to respond to various development scenarios from entry-level, mainstream to high-performance, addressing general-purpose MCUs also vertical-focused products to address specific markets. From the perspective of a one-stop chip development path, GD32 MCU products provide extensive Arm core options: including the common Cortex-M3 and Cortex-M4 cores and the latest Cortex-M23 and Cortex-M33 cores. All the GD32 MCU product series have a high compatibility level in terms of peripherals, pins, packages, and software development. It realizes flexible and seamless switching among the series and speeds up the user's research and development cycle while reducing development costs.

In August 2019, GigaDevice released the GD32V series, the world's first 32-bit general-purpose MCU based on the open-source instruction-set architecture RISC-V core. It has received extensive attention worldwide and has won numerous awards in various exhibitions in only one year. In the last year, GD32V has also been continuously improving and evolving with its new RISC-V ecosystem from scratch.

More top global manufacturers have become GD32V partners, such as SEGGER in Germany and IAR Systems in Sweden. The industry's mainstream commercial tools such as SEGGER Embedded Studio, SEGGER J-Link, IAR embedded workbench, and IAR I-jet have already been released, supporting the development and debugging of GD32V. It also provides connectivity to various cloud services such as Alibaba Cloud, Amazon AWS, and Microsoft Azure, to support edge computing. Additionally, the development board designed in cooperation with Seeed Studio has been delivered to several RISC-V users in China, Japan, Europe, and America. Also, GigaDevice has joined hands with RISC-V International to participate in a broader global technical collaboration and promotion activities. So, GD32V makes the development ecology of RISC-V MCU no longer fragmented and chaotic, but more systematic and mature. In the face of emerging application requirements for a new open-source industry ecosystem, GD32V has embarked on a path of global development and innovation worth exploring.

In constant anticipation of the developer’s needs, GigaDevice has set up a welcome industry center with GD32 MCU "product + ecosystem," which is efficient and effective. An active and open development model has evolved out of technological ecology, industrial ecology, and talent training system, which has illuminated the industry's direction. As products and tools progress accelerates, we believe that companies will become increasingly successful in meeting the semiconductor industry's opportunities and challenges.